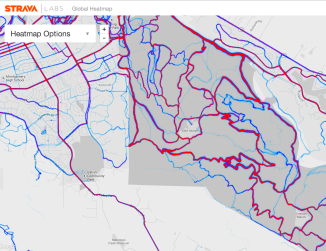 Not actually a new park map… but an actual representation of how the public is using the park.

STRAVA’s reasons for providing the data will strike a chord with many:

“We are providing this information in anonymous aggregate form to help improve infrastructure and safety for cyclists, runners and pedestrians.”

Check out your favorite park, and learn where the secret trails are. Do it quick – I suspect State Parks and other private organizations will put the kibosh on this amazing tool in short order.

Not a single mention of Levi Leipheimer being most notably missing from the Tour of California rosters.  This AP story reads like simple AMGEN PR:  (I’d love to compare the press release to the article)
Tour of California announces 16 teams for May race | PressDemocrat.com.

…I’d hope that our LOCAL news would get an interview with Levi… something to follow-up this: 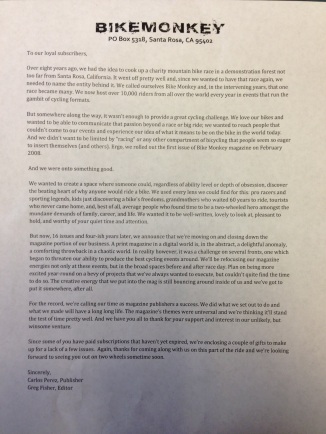 Levi on having some rough luck at last week’s Paris-Nice:

Hitting the tarmac three times in one day may have cost him a result in the Race to the Sun however, but Leipheimer acknowledges that things could have been a whole lot worse.

“I mean you know I am actually pretty lucky having crashed three times, hitting a motorbike,” he said in an interview on the team’s website. “I just have scrapes bruises and soreness, but it’s all going away pretty quickly.”

And on the upcoming Tour of California:

With Catalunya under his belt, Leipheimer will be building for the Tour of California, which starts in his home town of Santa Rosa on May 13th. As a three-time winner of the race, Leipheimer is looking forward to leading his new Omega Pharma-Quick Step team on US roads.

“It’s going to be exciting,” he said. “This whole year has been a fresh start, changing teams. It’s been a long time since I’ve changed teams, which brings a lot of new motivation and perspective. Regarding Amgen Tour of California, it’s an extra special year. It starts in my home town of Santa Rosa. I think that our community has been looking forward to this for a long time. I’m right there with them, looking forward to it. It’s going to be exciting.”